A Phase Space of Reproducibility 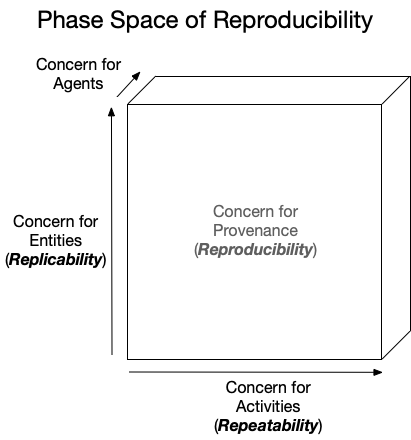 What does “reproducible science” encompass?

Here is one decomposition into “repeatability”, “reproducibility”, and “replicability”:1

Here is a conflicting account of the relationship between “replicability” and “reproducibility”:2

“…even if we can replicate the results of a paper, slightly altering the experimental setup could have dramatically different results. For these reasons, we don’t want to consider the authors code, as this could be a source of bias. We want to focus on the question of reproducibility, without wading into the murky waters of replication.”

It seems that ACM’s “replicability” is Edward Raff’s “reproducibility”, and vice versa. And the colloquial phrase “repeat after me” is at odds with ACM’s “repeatability”.

A trip to the dictionary

the process by which plants and animals give rise to offspring and which fundamentally consists of the segregation of a portion of the parental body by a sexual or an asexual process and its subsequent growth and differentiation into a new individual.

and reports the first known use in circa 1640, in the above sense.

So, it seems to me that reproduction subsumes replication — replication is a sub-type of reproduction where, subjective to an observer, the new individual is a replica — an indistinguishable image — of the parental body.

Repetition is about following the same method but without using a seed from the original performance.

Repetition of methods, replication of results

In terms of the W3C Provenance ontology’s4 core types of Agent, Activity, and Entity (diagram at top reproduced here):

How repeatable is reproduction? How replicable is it?

While we can consciously seek repeatability and replicability in reproduction attempts, we also typically value so-called “independent” reproduction, where it seems the investigating agent(s) were either not aware of original activities or of original starter/intermediate/output entities, or both, and yet reproduced them anyhow.