Towards a Materials Ontology With Protégé

I decided to build on my “20 queries” exercise and draft a partial ontology for materials using Protégé, an open-source ontology editor. I’ll focus discussion here on named restriction classes for materials. For example: what materials belong to the Zintl phase?

Below is a view in Protégé1 detailing the :ZintlPhase2 class: 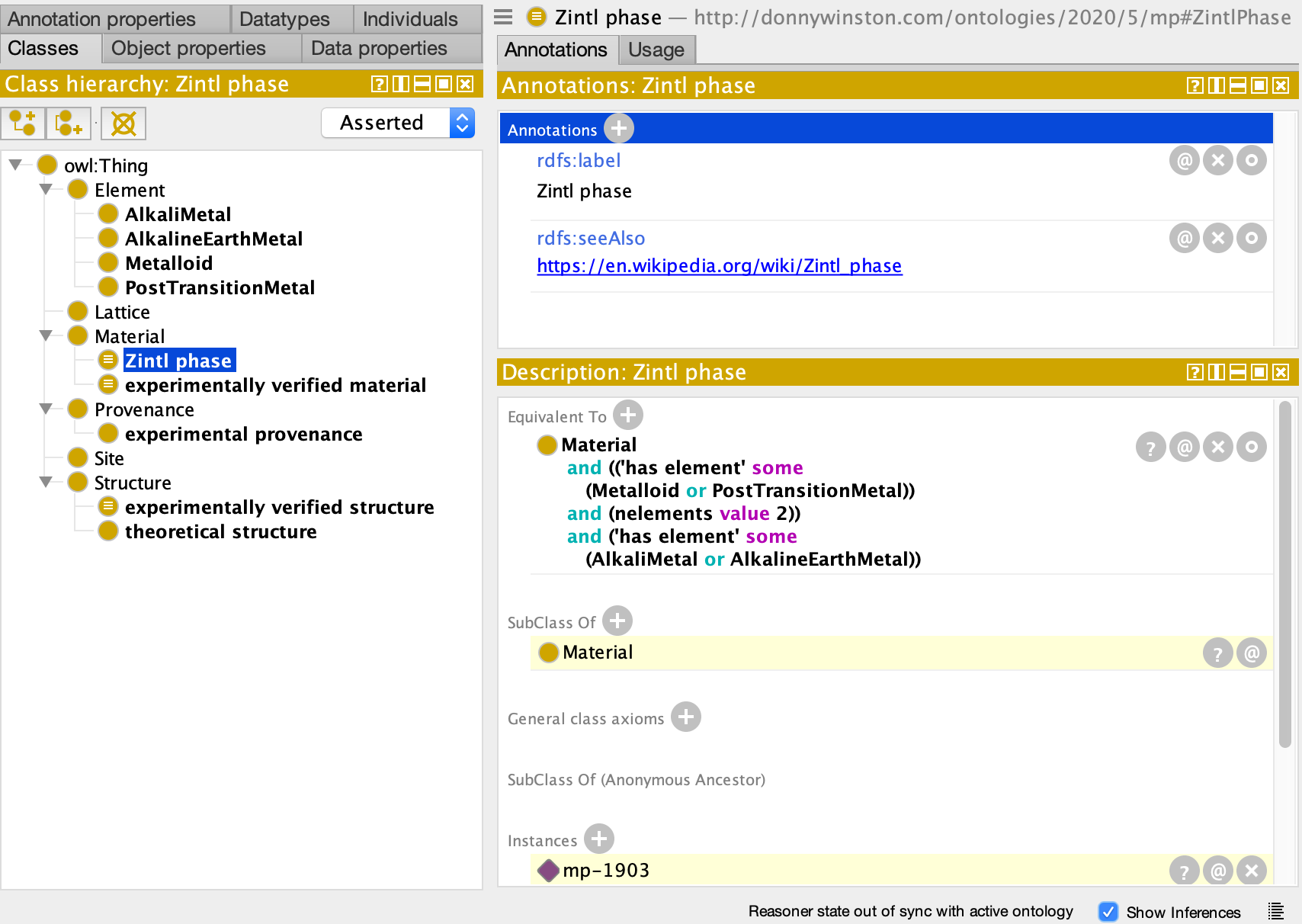 Rather than pinned merely as a so-called “primitive” class in a pre-defined hierarchy, the ZintlPhase class is defined as equivalent to a class that satisfies certain restrictions. This is a bit more powerful than defining an anonymous class and then giving it a name, because in the latter case you still need to produce instances of your named class through its constructor.

With an ontology such as this, you can run a reasoner over your data and infer not only what restrictions must apply to instances annotated as belonging to a class, but also infer class membership by noting satisfaction of necessary and sufficient conditions. In this case, the material mp-1903, containing aluminum and barium, has been inferred (yellow highlighting) to be an instance of ZintlPhase.

One notable aspect of OWL ontologies highlighted by this example is their Open World Assumption. The some keyword shown in the screenshot above sets an existential restriction3. A Zintl phase material must have an element that is a metalloid or a post-transition metal. It also must have an element that is an alkali metal or an alkaline earth metal.

If I had not included the value restriction on a separate property, that the number of elements nelements is 2, and instead tried a cardinality restriction of 2 on the ‘has element’ property, the reasoner would not infer any materials as Zintl phases. This is because of the Open World Assumption: just because the data for a material includes only two ‘has element’ assertions, perhaps there is another assertion not in the current data set that will eventually make its way to us. Of course there are ways to “close” things – including the use of so-called closure axioms – but “open by default” is the OWL way and is attractive for data interoperability.

I have merely explored some ideas about a materials data ontology based on my “20 queries” exercise. This demo ontology is by no means complete or even recommended as a basis, but I hope it’s helpful to illustrate some options for modeling in RDF and OWL via Protégé. Here is the demo ontology in full.