Many children not only like to build, they also like to knock things down – to hear the complicated noises and watch so many things move at once.

Let’s imagine a sibling agent to Builder called Wrecker, whose specialty is knocking things down:

Suppose Wrecker gets aroused, but there’s nothing in sight to smash. Then Wrecker will have to get some help – by putting Builder to work, for example.

But what if, at some later time, Wrecker considers the tower to be high enough to smash, while Builder wants to make it taller still? Who could settle that dispute?

Is the decision left to Wrecker, who activated Builder in the first place? What if both were activated by a higher-level agent, Play-with-Blocks? What if that agent in turn was activated by a Play agent, who may be in conflict with Eat and Sleep? 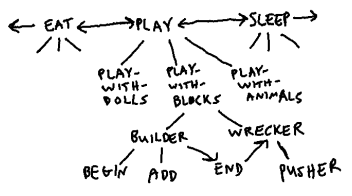 A child’s play is not an isolated thing. It always happens in the context of other real-life concerns. Whatever we may chose to do, there are always other things we’d also like to do.

In single-thread, synchronous computer programming, prolonged conflict may be avoided. A function A may call another function B in its body and wait for B to return. If B encounters trouble, it can raise an exception for A to catch. The chain of command for conflict resolution can be clear.

In the case of asynchronous, independent agents like Builder and Wrecker, what is the effect of prolonged conflict? Perhaps the conflict tends to weaken their mutual superior, Play-with-Blocks. In turn, this could reduce Play-with-Blocks’s ability to suppress its rivals. Next, if that conflict isn’t settled soon, it could weaken Play at the next-highest level. Then, Eat or Sleep might seize control.

Data, data everywhere, but not a value to validate…